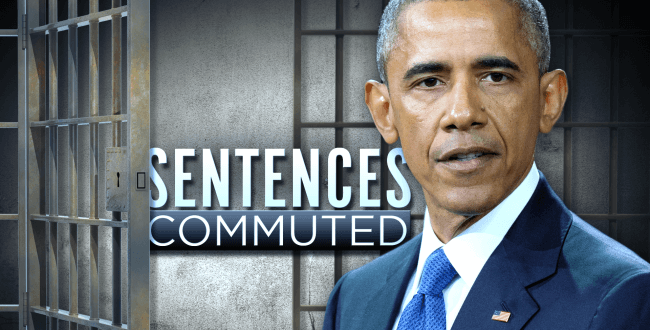 The power of the President to pardon criminals and commute sentences is enshrined in the constitution. This authority is an important part of the checks-and-balances designed by the founders.

Without a doubt, there are people who have been wrongfully convicted or mistreated by the Justice System who are deserving of forgiveness and a second chance at life. The power to grant such clemency with the stroke of a pen rests in the President’s hands.

Barack Obama has the right to free whatever federal inmate he sees fit. In this latest batch of 214 commuted sentences, the White House announced “all of the individuals receiving commutation today, incarcerated under outdated and unduly harsh sentencing laws, embody the President’s belief that ‘America is a nation of second chances.'”

Of those 214 commuted sentences, 56 were convicted of firearms related crimes.

For a lot of people, that won’t be a deal breaker. A lot of people believe that someone who spent 10 years in prison, primarily for narcotics distribution, he or she shouldn’t have to stay in prison because the prosecutor tacked on “felon in possession of a firearm” charges.

Well, if you are one of those people – or if you’re just curious about how Obama is once again out of his mind – I would like to introduce you to Joshua Boyer.

Joshua Boyer was convicted of felony possession and intent to distribute more than 5 kg of cocaine in 2001. He was sentenced to 288 months (24 years) in Federal prison and 5 years supervised release.

The President uses this case as an example to show how insanely harsh sentencing puts people behind bars for far too long.

I looked it up and I was completely surprised. Felony possession and intent to distribute 5 kg of cocaine is punishable by up to life in prison. I know, that is actually a little scary.

I can understand Obama wanting to commute this sentence. 24 years for cocaine dealing is a long time. When I saw this, the Libertarian side of me got pretty angry. The mandatory minimum was 10 years, so why not commute the sentence since he already served 15 years?Well, here’s the problem… Joshua Boyer wasn’t only charged with cocaine distribution. He had a gun on him when he was arrested.That is a big deal. Joshua Boyer was charged and convicted of felony possession of a firearm in furtherance of a drug trafficking crime (18 U.S.C. § 924).This gun charge alone has a mandatory minimum of 5 years in prison.I emphasize minimum because Joshua Boyer should not have qualified for the minimum.

He didn’t just have any gun… Joshua Boyer violated 26 U.S.C. §§ 5861(d) and 5871, which makes it a felony to “receive or possess a firearm which is not registered to him in the National Firearms Registration and Transfer Record.”

Now, us gun owners know exactly what this means. He illegally possessed an unregistered NFA weapon.

The National Firearms Act of 1934 regulated the ownership of machine guns, short barreled rifles, short barreled shotguns, silencers/suppressors, and other destructive devices. The law requires extra vetting – beyond a normal NICS check at your local gun store – and a payment of a $200 tax to register the weapon with the ATF.

If you go through 18 U.S.C. § 924, you see that an extra sentence is applied if an illegally owned and unregistered NFA weapon is used in furtherance of narcotics distribution.

–
Even with my cursory search of Mr. Boyer’s court papers, I cannot find specific reference to which NFA item he was found to be in possession of. I will keep looking, but I suspect that could require an in-person records request in Florida, which I am not capable of filing at the moment. The fact that he was not charged with the mandatory 30 years for possessing an unregistered machine gun or silencer in furtherance of narcotics trafficking makes me think that he was not found to be in violation of subsection (II) above.So, let’s low-ball it. Let’s assume that Mr. Boyer was found in possession of an SBR or SBS as opposed to a fully-automatic machine gun. Use of an SBR or SBS in furtherance of narcotics distribution carries a mandatory minimum of 1o years in Federal prison.The mere possession of an unregistered NFA weapon, unconnected with any other crime, is in itself a mandatory minimum of 10 years. Those are two separate charges that Mr. Boyer was convicted of.So here we have three charges, each with mandatory minimums of 10 years. He was ultimately sentenced to 24 years in prison and 5 years on supervised release, which brings us right around the 30 years required under the statute.Obama has commuted his sentence after he served just 15 years of his sentence.So this is the all important question: what portions of this sentence did Joshua Boyer “serve” before having his sentenced commuted? Did he serve all of the mandatory minimum for drug trafficking and then just 25% of the sentences related to his firearms crimes? Did he serve almost all of the firearms sentences but none of the drug sentence?
That question could be a lot more complicated than I am really interested in answering, point is simple: It is impossible for Joshua Boyer to have served all of the mandatory minimums for his gun related convictions. The President’s statement that he was freeing people convicted under unreasonably harsh drug sentencing is false. Either this man served his time for drug trafficking and the President just let someone off the hook for illegal possession of an NFA gun, or he served out his gun crime sentence and Obama just made it so he will face no punishment for trafficking 5 kg of cocaine.
We have a President who has campaigned on making it harder for law-abiding civilians to own semi-automatic weapons. He continues to assert that the failure to pass an assault weapons ban was the greatest failure of his presidency. But when presented with a man serving almost thirty years in prison, the majority of which, at least theoretically, for possessing an unregistered NFA weapon, he decides to let him out.The President can’t have it both ways. He can’t say that our gun laws are not strict enough and then turn around and commute the sentence of someone who was convicted of violating one of the strictest gun control laws we have on the books.He cannot call for a nation-wide registry of firearms – which is what a universal background check system would require, as the acting-ATF Director recently admitted – while simultaneously saying the sentences for possessing an unregistered NFA item in connection with drug trafficking are too strict.There is a serious disconnect here, but then again, why should we expect President Obama’s gun control policy to be logical? This is, again, coming from the political party that is currently trying to ban the “shoulder thing that goes up.”

–
We are in the process of rolling out this website devoted exclusively to 2nd Amendment news. Please pardon our mess during this roll-out.