Two years ago, the Obama administration banned the importation of Soviet Union surplus 5.45×39 7N6 ammunition. This is the ammunition used in the AK-74 rifle.

The reasoning? U.S. District Judge John C. Coughenour determined that 7N6 ammunition contains a steel core and can be fired from a handgun. He also declared that the import company that filed the lawsuit, PW Arms, never disputed the bullets can pierce body armor and called the company’s arguments disingenuous.

I am here to tell you why this is, for lack of a better term, horse shit. Yes, that is a scientific term.

Whether the bullets can pierce body armor, in the judge’s words, is irrelevant. If that was the standard then anytime a pistol was made to chamber a high-powered hunting cartridge, that ammunition would have to be banned.

Whether or not ammunition is classified as “armor piercing” is determined by a specific section of US firearms law (18 U.S.C., § 921(A)(17))

Here is the relevant statute:

(i) A projectile or projectile core which may be used in a handgun and which is constructed entirely (excluding the presence of traces of other substances) from one or a combination of tungsten alloys, steel, iron, brass, bronze, beryllium copper, or depleted uranium; or

(ii) A full jacketed projectile larger than .22 caliber designed and intended for use in a handgun and whose jacket has a weight of more than 25 percent of the total weight of the projectile.

Those are the two ways that the law allows the Federal government to designate a bullet as “armor piercing.” By the law’s own definition, 5.45×39 ammunition CANNOT be classified as armor piercing.

As you can see in (B)(i), there are two parts of this that must be met for ammo to be classified as “armor piercing.” Ammunition must have a “projectile or projectile core which may be used in a handgun…”

Before we even move on to the rest of the sentence, it is important to note that even a year+ after the ammunition was banned, there is still not a commercially available 5.45×39 pistol on the American market. The ATF used an obscure company’s request to import AK74 pistols – which never actually got imported – as the excuse to ban the ammunition. If the ammunition can be used in a handgun, the ATF needs to produce evidence of a commercially available AK-74 handgun here in the US, not evidence that there is a handgun made to fire the bullet somewhere in the world.

But the second part is equally damaging to the government’s case.

“…and [a projectile or projectile core] which is constructed entirely (excluding the presence of traces of other substances) from one or a combination of tungsten alloys, steel, iron, brass, bronze, beryllium copper, or depleted uranium.” 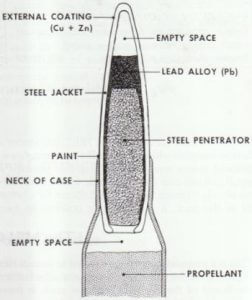 The only way that this ammunition could possibly meet (B)(i)’s definition of “armor piercing” would be if the portion of lead alloy (shown in the diagram above) was classified as merely being a “trace element.” It clearly is not. One photo making the rounds on the internet shows very clearly that lead is present within the projectile or projectile core in a quantity greater than simply being a “trace element.” That is what it looks like when the lead from a 5.45×39 surplus bullet is melted down. Trace elements, by definition, should not be visible to the naked eye at any time nor should they be of this quantity.

So with regard to the (B)(i) definition of armor piercing, not only has the ATF failed to acknowledge that 5.45 commercially available pistols don’t exist, but the ammunition also fails to meet the definition because the projectile and projectile core are not made up entirely of steel or some other prohibited metal.

A full jacketed projectile larger than .22 caliber designed and intended for use in a handgun and whose jacket has a weight of more than 25 percent of the total weight of the projectile.

If we want to deal with specifics, the 5.45×39 surplus 7N6 bullet is not fully jacketed. Anyone who has pulled a bullet, or simply looked at the diagram above, can see that the jacket ends at the bottom of the projectile, exposing both lead and steel.

Secondly, the 5.45×39 round was both designed and intended for use in Soviet Union assault rifles, never for pistols. So it obviously cannot meet that part of the definition.

And finally, the law explicitly says that an armor piercing bullet must be a “full jacketed projectile larger than .22 caliber.”

The bullet seated in surplus 5.45×39 ammunition is a .22 caliber projectile. The bullet is officially measured as having a diameter of 5.60 mm, which comes out exactly to .220 inches. The bullet is actually smaller in diameter than the projectiles loaded into .22 lr cartridges.

The M1 Carbine was officially designated as the United States Carbine, Caliber .30, M1. The ammunition it fires is officially designated .30 Carbine even though it fires a .308 inch diameter projectile. The same goes for the M1 Garand (United States Rifle, Caliber .30, M1) and the ammunition it fires (.30 Gov’t ’06). Precedent clearly shows that ammunition can be called .30 Cal or .22 Cal without requiring the diameter of the bullet to be exactly .300000 or .220000 inches.

But, if this is the aspect that gets the ban upheld, then I’d like to see an ATF agent with a set of calipers checking every single round that comes into the country…

This is just another reason why this Presidential election is more important than previous elections. The Judge who issued this nonsense decision is U.S. District Judge John C. Coughenour. He is 75 years old. The next President will likely decide who replaces him…

We encourage everyone to contact their Congressman and Senators to DEMAND that they intervene to stop this absolutely lawless ammunition ban.