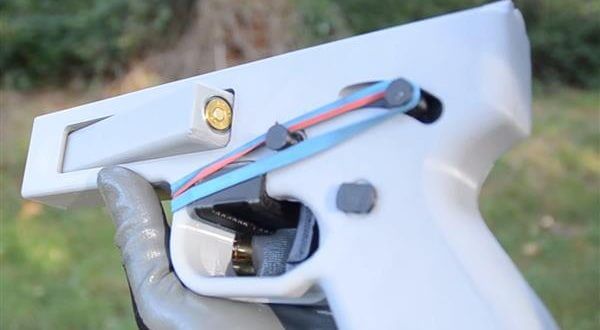 Disclaimer: I am not a lawyer and this article should not be construed as legal advice. Always consult an attorney before making the decision to build your own firearm for personal use.

As soon as someone learns that I own a 3D printer, the first question out of their mouth is usually, “are you going to 3D print a gun?” When I respond that I am making a gun, they usually respond, “can you even legally 3D print a gun!?!?”

Can you legally 3D print a gun on Earth?

This week, a man was arrested in Australia after he advertised a 3D printed airsoft gun for sale online. Under Australian law, it is illegal to manufacture a firearm replica.

If you live abroad, you need to consult your own country’s laws. Since very few countries have laws allowing open civilian firearm ownership, chances are it would be illegal for you to 3D print a gun.

But if you live in the United States, the land of the free and home of the brave, it is not difficult to determine whether you can legally 3D print a gun

Can you legally 3D print a gun under Federal law?

Yes, at the Federal level you can legally 3D print a gun for personal use as long as the firearm you make will be legal for you to own.

What does that mean? The firearm itself has to be legal (aka don’t print a machine-gun or short barreled rifle without the proper paperwork) and you need be allowed to own a gun (not a prohibited person).

There is one Federal law specific to 3D printed guns. It is against Federal law to manufacture an “undetectable firearm.” There must be enough metal in the firearm for it to be detectable by a metal detector.

For most people, this requirement is easily met. If you legally 3D print a gun, then the bolt alone usually meets this requirement. If you are trying to 3D print a Liberator or Songbird pistol made entirely out of plastic filament, then you need to get creative to make sure that there is the requisite amount of metal in the gun. Many have resorted to adding a block of metal to the frame or grip of the weapon to remain compliant.

Can you legally 3D print a gun under state law?

Well that is going to depend on the state. Many liberal states include restrictions on individuals manufacturing firearms for personal use. The general rule of thumb is if you live in what you consider to be an anti-gun state (like New Jersey), chances are you are prohibited from 3D printing any gun. Always check your state and local laws.

Even in states where it is legal to manufacture a firearm for personal use, it is important to make sure that the firearm you make is legal to own. In states that have so-called “assault weapons bans,” it might be legal to 3D print your own gun as long as you don’t inadvertently manufacture an “assault weapon.” Even a featureless rifle can be illegal if you etch “AR-15” onto the side, since that is usually a type of firearm that is banned by name.

Can you legally 3D print a gun under local laws?

Always consult with your local laws before manufacturing your own firearm for personal use. But generally, you will probably know whether you live in an anti-gun municipality.

Do I need to put a serial number on a 3D printed gun?

According to Federal law, there is no requirement that someone put a serial number on a firearm that they intend to use for personal use. Serial numbers are required for all firearms created by federally licensed manufacturers.

You will need to consult with your state and local laws to see if there are any laws against possession of firearms without serial numbers. These laws usually have to do with “defaced firearms.”

As long as you 3D print a gun for personal use, it is generally legal to manufacture it without a serial number. Though, a serial number is definitely recommended since it doesn’t really add that much to the process to add a string of numbers to the model’s .stl file.

Can I sell a 3D printed firearm?

Before considering selling off a collection of homemade guns, always consult with an attorney.

Throughout this article, you’ve seen the phrase “for personal use.” Under Federal law, a Federal firearms license is required for anyone who manufactures or sells firearms as part of a business.

The main factors that play into this are intent and quantity.

Even for commercially manufactured firearms, it is completely legal for a gun owner to sell off parts of his or her collection. The issue becomes when he or she buys guns for the purpose of reselling them.

If you build an AR-15 from a parts kit, hold onto it for a few years, and then decide to sell it to make room in your safe, this is completely legal. But if you start buying stripped receivers and selling complete rifles often, then you lose the “personal use” protections within the law.

The same goes for 3D printed guns. Theoretically, you could sell a personal gun you manufactured as long as you didn’t manufacture it for the purposes of resale.

But even if this is legal, it is a bad idea. Every 3D printed gun will fail at one point or another. Some gun failures are more dangerous than others. You do not want to be held responsible for manufacturing a firearm that injures someone else.

Overall, it is up to you to figure out whether you can legally 3D print a gun.

If you live in the United States and live in a “free state,” you are generally allowed to 3D print a gun as long as you are legally allowed to own a gun. But it is important to consult all of your state and local laws.

It is important to note that these guns must be for “personal use.” If you want to legally 3D print a gun or multiple guns for resale, consult the ATF for an application to become a Federally Licensed Firearm Manufacturer.