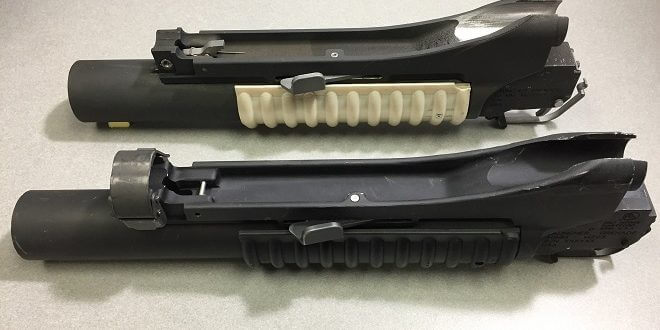 The weapon is called RAMBO, which is short for Rapid Additively Manufactured Ballistics Ordnance was created on a 3D printer and was the result of 6-months worth of collaborative efforts.

For safety purposes, springs and fasteners were not printed. 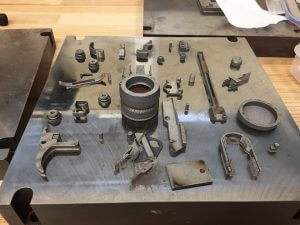 But don’t go running to your plastic filament FDM 3D printer quite yet. First of all, a 40mm grenade launcher is considered a “destructive device” and requires the same ATF permits that silencers and full-aug firearms require. So unless you have permission to manufacture a destructive device, don’t do it.

Second of all, the parts were printed in metal. Each and every 3D printed part was sintered in aluminum or printed in 4340 alloy steel. The entire 3D printing process took 35 hours.

This might seem tedious, but ARDEC actually found that the entire process, from design to manufacturing,  actually cost “tens of thousands of dollars less than identical components created with standard production methods.” Most of the shaved costs come at the front end of the process. It is much faster and cheaper to prototype with 3D printers.

Additionally, when the launcher was tested, ARDEC fired it 15-times and found that the “test shots did not produce any signs of degradation, and the rounds’ muzzle velocities were within 5% of the velocities achieved by standard launchers.”

So, it was a success.

While this sort of metal printing technology is still prohibitively expensive for non-commercial users, it shows that the theory behind our 21st Century Gun Project is sound. Not only was 3D printing technology able to produce a functional 3D printed grenade launcher (an NFA destructive device), but the cost of the project – from beginning to end – was actually cheaper than traditional manufacturing processes.

You can read more about the RAMBO project in ARDEC’s full report.

Disclaimer: I am not a lawyer and this article should not be construed as legal advice. …