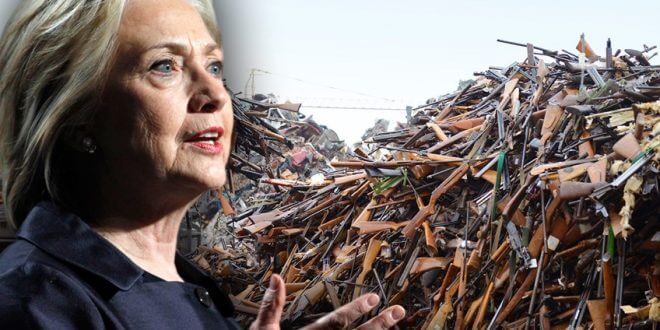 We know that the Clintons hate guns. Bill Clinton is the President who signed the first Assault Weapons Ban into law. It doesn’t get any more anti-2nd Amendment than arbitrarily banning guns based on what they look like and what cosmetic attachments they have…

We know for a fact that Hillary Clinton’s plan to undermine the 2nd Amendment will be done through passage of what she calls “common sense gun reform” at the local, state, and federal levels. That is only possible by reversing a vital Supreme Court decision.

The center of Hillary Clinton’s plan to essentially abolish the 2nd Amendment is found in her promise overturn the landmark 2008 Supreme Court case Heller versus District of Columbia. Hillary Clinton has been caught on audio tape saying that the Supreme Court ‘got it wrong on the 2nd Amendment’ and that she would make that case every chance she got (including through judicial nominations).

But what is Heller v District of Columbia?

The 2008 Heller case struck down a Washington DC statute that  (1) effectively banned possession of handguns by non law enforcement officials and (2) required lawfully owned firearms to be kept unloaded and disassembled or locked when not located at a business place or being used for lawful recreational activities.

The DC statute made it illegal to own a handgun as an everyday citizen and illegal to possess an operational, ready-to-use rifle or shotgun in your home capable of being utilized for self-defense at a minute’s notice. The Supreme Court said that both were unconstitutional.

The Heller case determined when the Founders put the phrase “right of the people” into the 2nd Amendment, it meant the same as when it is used in the 1st and 4th Amendments: that the right belongs to the people. To reverse the decision would be to say that the people do not have this right.

But Hillary Clinton likes to speak in legalese. She says she is not interested in eliminating the individual right to keep and bear arms (she is), only that she seeks to overturn the Supreme Court’s ban on municipalities enacting “common sense gun legislation.” So let’s see what she means by that.

This is what gun ownership would look like in Hillary’s ideal version of America with “common sense gun legislation” on the books:

It should come as no surprise that if Hillary Clinton promises to overturn the Supreme Court decision that determined the government cannot ban handguns, her intended result would be to allow bans on handgun ownership at all levels of government. Just as you can’t promise to overturn Roe v Wade without dismantling the right to abortion, it is impossible to advocate reversing Heller while keeping the right to own a handgun intact.

Take a good long look at the picture right above. That is what handgun ownership looks like in Hillary’s America. 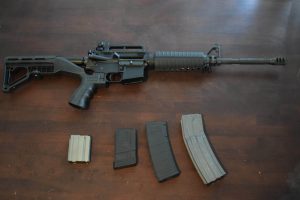 Hillary Clinton is campaigning on a promise to ban so-called “assault weapons,” but what she is essentially calling for is a ban of modern semi-automatic rifles. The rifle pictured above (with the exception of the bump fire stock) is a NJ-compliant “assault weapon.” New Jersey’s ban on semi automatic rifles mirrored the Federal ban and was left in place when the assault weapon provisions of the Violent Crime Control and Law Enforcement Act of 1994 sunsetted in 2004. Hillary Clinton is calling for an even stricter ban on semi-automatic rifles so even this 1994-compliant rifle shown above would be banned in Hillary’s America.

Also, notice the magazines. See the 10-round magazine on the left? That’s your limit if Hillary is elected and gets her way. The 20-round, 30-round, and 60-round magazines shown above will be deemed too dangerous for civilian ownership in Hillary’s America. Hope you make every shot count…

No Functional and Usable Long Guns in Your Home

Washington DC’s law requiring long guns be unloaded, locked up, or disassembled was ruled unconstitutional by the Heller decision. If Hillary succeeds in reversing Heller, municipalities, states, and even the Federal government will be able to require you to keep your rifles and shotguns like this… 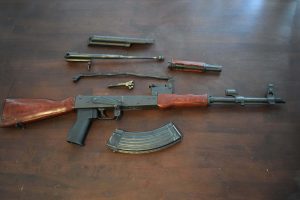 This rifle above was legally imported during the 1994 Clinton Ban as a single-stack WASR-10 “hunting rifle.” After moving out of a gun control state, I took a dremel to the magazine well so it can accept double-stack magazines. Even if you were able to own a rifle like this in Hillary’s America, reversing Heller would give your municipality and state the authority to force you to keep it disassembled while stored in your home. 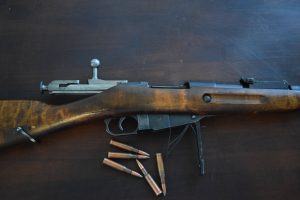 Heller overturned the DC statute that required all civilian owned long guns be kept in the house unloaded. Hillary Clinton reversing Heller would allow statutes like this to be added to the books. Home invaders will not give you time to load your home defense shotgun or rifle when they kick in your door at 3:00 AM… 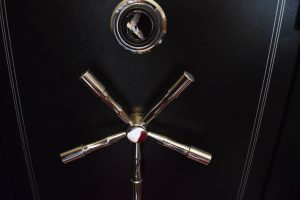 It is generally a good idea to keep firearms within a locked case of some kind, especially if you live with a child. The exception to this would be a home defense firearm. The shotgun in the closet or the handgun in your nightstand need to be accessible. If someone breaks into your house while you’re sleeping, you won’t have time to fiddle with a combination and load the gun under pressure. Hillary’s plan to reverse Heller would allow municipalities to require that all firearms be kept unloaded and locked up at all times.

A Ban on Defensive Ammunition 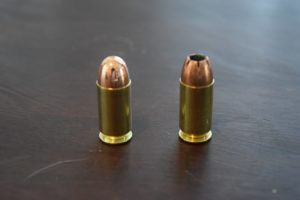 Hillary Clinton claims that she just wants to allow local and state governments to craft “common sense gun legislation” and that Heller prevents that. This includes San Francisco’s ban on hollow point ammunition. Shown above are two different .45 ACP rounds. The round on the left is a target round and the one on the right was taken right out of my FNX45 Tactical’s magazine. If you know anything about defensive firearms, you know that you only use hollow points. They are designed to dump all of their energy usually within the first couple inches after impacting flesh. Using a hollow point round in a defensive situation limits the likelihood of over-penetration and a “through-and-through” where you shoot an assailant but the bullet exits his body with enough energy to pose a threat to bystanders. Banning hollow points not only endangers the community but also can be seen as a de facto ban on defensive pistol or rifle use inside of the home.

A Ban on “Armor Piercing” Ammunition 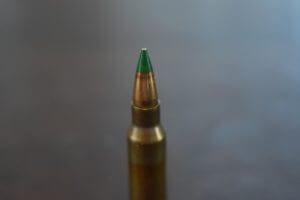 The law governing “armor piercing” ammunition was designed to protect law enforcement officers from pistol ammunition that can pierce a Level IIIA soft ballistic vest. These vests are only designed to stop pistol ammunition. However, starting during the Bill Clinton administration, the ATF began banning the importation of certain armor piercing rifle rounds because they could technically be used in some pistols. The picture above shows a green-tip 5.56 M855 round. This has been the standard ammunition used in the Military. Obama’s ATF tried to ban it last year but was forced to back down. In Hillary’s America, any rifle round that contains enough energy to pierce a IIIA vest – which is literally every center-fire rifle round – would be on the chopping block. 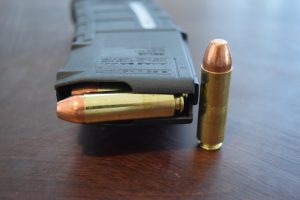 The Democrats have perfected the art of using technical terms to scare the firearm-illiterate public. The campaign against .50 caliber rifles is just that. If Hillary Clinton believes that Heller should be overturned to allow municipalities and states to pass gun bans, then she must support the San Francisco law, for example, that bans all ownership of .50 caliber weapons. Yes, any .50 cal ban that does not explicitly craft an exemption also includes a ban on 12 gauge shotgun slugs…

A Ban on Ammunition Components 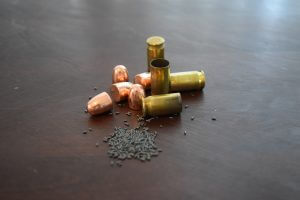 In addition to its past ban on handgun ownership, Washington DC also has a statute banning the possession of “ammunition components’ by unlicensed individuals. In 2014, Witaschek was convicted in Washington DC for “attempted possession of unlawful ammunition.” His crime? He owned a box of replica antique muzzleloader bullets designed to be used in civil war-era firearms. That crime was tacked on top of the “possession of unlawful ammunition” charge for the single 12 gauge shell that police found in his house. DC’s law bans the unlicensed ownership of shell casings, bullets, primers, and gun powder. This is exactly the type of common sense gun legislation that Hillary Clinton wants to see nationwide.

It has been almost 16 years since Bill Clinton left office. Even with as onerous as Barack Obama’s anti-gun executive orders have been, most of us have taken the past decade and a half for granted. Unless you live behind the gun control iron curtain in states like New Jersey or California, it is hard to envision returning to Clinton-style gun control. But that is exactly what Hillary Clinton is proposing.

Vote like your 2nd Amendment rights are at stake… because they are.