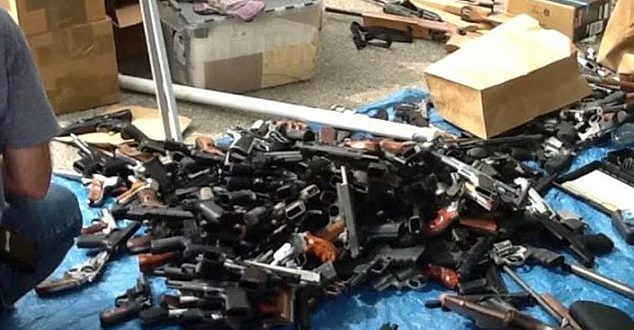 Remember last year when law enforcement stumbled upon a huge collection of weapons and ammunition? They called it an “arsenal” and did everything in their power to demonize the deceased owner.

When California resident Jeffrey A Lash passed away last year of natural causes, police discovered a collection of over 1,500 firearms, 6.5 tons of ammunition, and $250,000 in cash in his home.

At the time, as you might remember, there was a lot of speculation that the weapons were illegal in some way. It’s always interesting how the media speculates about illegal weapons and never corrects itself when it is determined the guns were legal. But, I digress…

All of Mr. Lash’s guns were purchased legally. But because he left no will, this collection is being inherited by anti-gun family members who have pledged to destroy these “weapons of war.”

Family members set to inherit a stockpile of guns and ammunition, worth millions of dollars, plan to destroy the weapons “to send a message,” their attorney Daniel Brookman told ABC News today.

“They want these instruments of death to be destroyed,” Brookman said. “They don’t want these weapons out on the street” …

“They don’t want them to contribute to the carnage,” he said. “Especially in light of San Bernardino and Orlando, as ordinary citizens they feel like a stand should be taken.”

He added: “The relatives are wanting to send a message not just to the nation at large, but also to our elected leaders.”

It’s interesting that the family members aren’t going to destroy the $250,00o of cash that their relative left behind. By their own admission, this money was likely earned by selling “instruments of death” so you’d expect them to want nothing do do with the small fortune.

There is no telling how much the gun collection is worth. Some estimates peg its value at over $5 million dollars.

Just another reminder that if you care about passing on your firearm collection, you need to put your guns into a trust and draft a will.