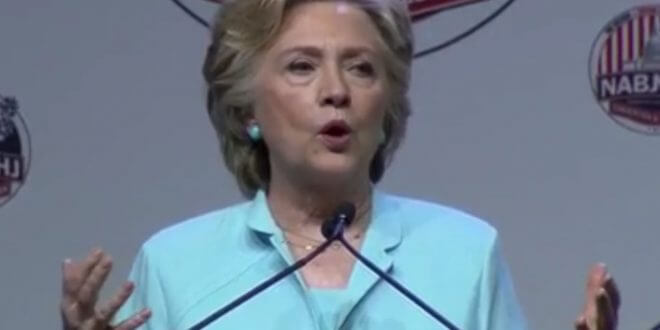 The 2nd Amendment Was Designed to Stop People Like Hillary Clinton

Donald Trump today made headlines, with some far-left news sites insinuating that he called for Hillary Clinton to be assassinated. Here’s what he said:

“If she gets to pick her judges, nothing you can do, folks. Although the Second Amendment people — maybe there is, I don’t know.”

At no time did Donald Trump say he wanted Hillary Clinton to be “assassinated.” To suggest that would be to imply that the only way gun owners can enact political change is through pulling the trigger.

The Trump campaign clarified that Mr. Trump was referring to the power of gun owners to affect change through the ballot box, similar to the way that gun owners stopped Bill Clinton’s gun control push by handing the President significant midterm losses in Congress.

I think that Trump was right the first time, however. No… not that Hillary Clinton should be “assassinated,” but rather that the American people have an obligation to rise up and stop her if she gets into office and implements her radical anti-gun agenda.

I want to be absolutely clear in what issue Hillary Clinton is campaigning on. She can say that she wants ‘common sense gun reform’ until she’s blue in the face, but what she has promised in private is much more telling. She is promising to dismantle the 2nd Amendment.

In a private New York fundraiser, Hillary Clinton was recorded on audio declaring that

“the Supreme Court is wrong on the Second Amendment. And I am going to make that case every chance I get.”

Since then, Hillary Clinton’s own advisers confirmed that she was referring to the Supreme Court’s Heller v District of Columbia ruling.

This is the case that affirmed that the 2nd Amendment protects an individual right to own a gun, including handguns, unconnected with militia service.

The Clinton campaign has tried to walk this back. Here’s the statement they put out today.

“Along with the vast majority of Americans, Clinton believes there are common sense steps we can take at the federal level to keep guns out of the hands of criminals while respecting the 2nd Amendment. She also believes Heller was wrongly decided in that cities and states should have the power to craft common sense laws to keep their residents safe.”

Even more craftily worded legalese. Hillary Clinton is counting on you not understanding the facts of the Heller case.

Dick Anthony Heller was the lead plaintiff in a case to overturn the District of Columbia’s ban on handgun ownership. He was a special police officer but was prohibited, as an individual, from owning a handgun or possessing a functional long gun within his home.

In Washington DC at the time, it was illegal to own an operable handgun. Flat-out illegal. Couldn’t legally be done. It was also required that residents keep their rifles and shotguns locked up or disassembled and rendered inoperable at all times.

A case was brought before the Supreme Court that the 2nd Amendment, protecting a right of the people to keep and bear arms, makes it perfectly clear that the people have a right to own guns. The Court agreed.

The 2nd Amendment protects an individual right to own handguns, rifles, and shotguns, the Supreme Court decided, and neither the District of Columbia’s ban on handgun ownership nor the de facto ban on long gun ownership could pass constitutional muster.

That is what Heller determined. You, as a law-abiding citizen, have the right to own guns. The government cannot ban guns outright or regulate them to the point of a de facto ban, such as require them to always be locked up or disassembled.

There is NOTHING else that Hillary Clinton can be referring to. When she talks about the need to overturn Heller to allow municipalities to pass “common sense gun reform,” she is talking about Washington DC’s gun ban.

The Supreme Court’s Heller decision affirmed that the 2nd Amendment to the United States Constitution protects an individual right to own guns. Hillary Clinton has promised to overturn this ruling.

Both of the above statements are true. Thus, Hillary Clinton has promised to eliminate the individual right to own guns from the 2nd Amendment.

The Clinton campaign points to Justice Breyer’s dissent and argument that states and municipalities have a public interest in banning guns. But the campaign forgets to include this nice little sentence from Breyer’s 2010 McDonald dissent:

“I can find nothing in the Second Amendment’s text, history, or underlying rationale that could warrant characterizing it as ‘fundamental’ insofar as it seeks to protect the keeping and bearing of arms for private self-defense purposes.”

The Clinton campaign is expecting you to be stupid. They are hoping that they can throw around platitudes like “common sense gun safety regulations” or cite a Supreme Court dissenting opinion without you reading into the matter and learning the truth.

And now back to Trump’s joke about 2nd Amendment people stopping Clinton from overturning Heller. I have an honest question: when a Presidential candidate literally campaigns on a message of eliminating the Constitutional right of Americans to own guns and to defend themselves within their own homes, are we gun owners supposed to take the prospect of this tyranny lying down? Are we supposed to say, “thank you, can I have another?”

What does Hillary Clinton actually think will happen if she succeeds in eliminating the individual right to own firearms?

No one wants to use the right to self defense afforded within the 2nd Amendment. It is our solemn hope that we never get that far. Whether it is using a concealed handgun to defend yourself in public or taking up arms to resist a tyrannical government, these are last-ditch mechanisms.

But if Hillary Clinton becomes elected and is able to implement her anti-gun agenda, God help us.