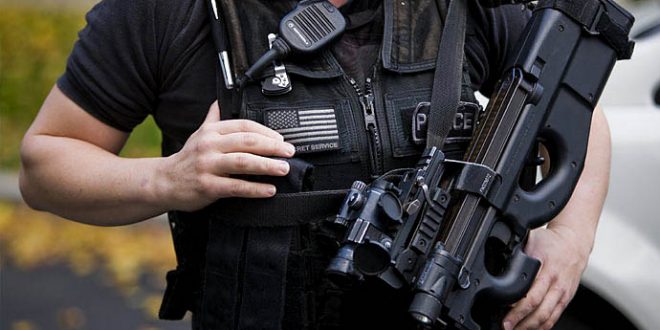 A Secret Service agent with the Counter Assault and Tactical Division holds a loaded weapon in front of the North Portico of the White House in Washington.

One of the greatest disconnects in politics is how liberal politicians enjoy the benefits of taxpayer-funded bodyguard protection while simultaneously campaigning to eliminate the average American’s ability to defend him/herself.

“If Hillary Clinton is so sure that Americans should not have the right or ability to protect themselves, then she should give up her Secret Service protection,” the memes usually read.

But this got me to thinking… aside from the talk of gun ownership in general, what do Hillary Clinton and the Democrats think about civilians owning the guns used by the United States Secret Service?

I am not going to deal with the principles of fully automatic fire. Thanks to the National Firearms Act of 1934 and the Firearm Owner Protection Act of 1986, it is tremendously difficult for the average citizen to own a machine gun. So for the purposes of this analysis, we will look at the platforms themselves, not whether they have an additional selector switch. 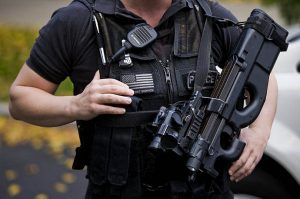 The FN Herstal P90 is now the submachine gun of choice for the United States Secret Service. There is a belief that the agency continues to use the MP5 in certain circumstances, but there has been a constant push forward to adopt the P90 since many Secret Service Agents carry FN Five-seveN pistols as their sidearms and they share a common ammunition caliber (5.7x28mm).

The P90 submachine gun is easily concealable, allowing agents to carry them under suit or winter jackets and the 5.7x22mm ammunition (which we’ll discuss in a bit) is a fast moving, light bullet with excellent penetration. 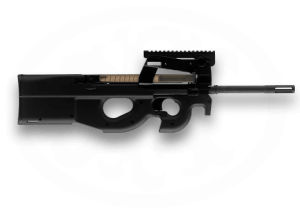 So by all accounts, the civilian rifle version of this USSS submachine gun is less lethal. However, if you look at the most recent Assault Weapons Ban – which Hillary Clinton has promised to implement if elected – the PS90 is explicitly banned by name.

So the submachine gun that Hillary Clinton relies on for Secret Service protection, even when neutered to become civilian-legal, is apparently too dangerous for us lowly plebs to own. Do as she says, not as she does… 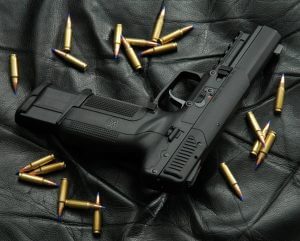 As I mentioned above, one of the many reasons that the FN P90 is appealing to the United States Secret Service is ability to use one type of ammunition across multiple platforms. Agents carrying a P90 can also carry an FN Five-seveN pistol chambered in the same caliber.

The FN Five-seveN, along with its 5.7x28mm ammunition, have long been a target of anti-gun lawmakers. Hillary Clinton’s longtime friend and current NY Congressman, Rep. Eliot Engel, has repeatedly tried to pass legislation to ban both the Five-seveN and the ammunition it uses.

Idiotically titled the “Protect Law Enforcement Armor (PLEA) Act,” this legislation would ban the Five-seveN, 5.7×28 ammunition, and any other handgun capable of firing ammunition with enough power to pierce a soft bullet proof vest. As you will see a little later, this isn’t the only pistol caliber that can pierce soft-kevlar.

Rep. Engel’s legislation goes out of its way to label the Five-seveN as too dangerous for civilian ownership…

While Hillary Clinton may not have commented specifically on this legislation, she has come out in favor of banning so-called “armor piercing” ammunition, so it is easy to assume that she would be willing to sign similar or identical legislation.

So there it is. The second gun in the United States Secret Service’s arsenal that Democrats believe to be too dangerous for civilian ownership… 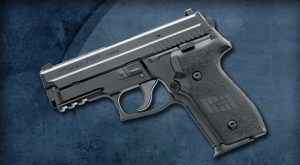 While not explicitly banned by name in any introduced legislation, the Sig P229 is one of the few guns in the USSS arsenal that Democrats seem ok with civilians owning.

Currently, there are multiple bills in Congress that seek to ban handgun imports. While these bills would have cut off the importation of the Sig P229 in past years, Sig Sauer now produces almost all of its guns sold in the American market in its New Hampshire plant. So, the Sig P229 seems safe for now…

…Except for the fact that Hillary Clinton is actively campaigning on overturning the Supreme Court’s Heller decision and eliminating the right of Americans to own a handgun at all.

Given Hillary Clinton’s promise to eliminate the Constitutional right to own a handgun, we’re going to have to put this pistol in the category of “too dangerous for civilians” as well.

Now I know what you’re saying. The Democrats don’t want to ban shotguns, right? Wasn’t it Joe Biden who said that the (double barrel) shotgun was the perfect gun for self defense.

Well, the Remington 870s that the Secret Service deploys have barrels that are 11.5″ long. Everyone knows that making a shotgun 6.5″ shorter than the civilian legal model makes it immeasurably more dangerous.

Now, you might be thinking that no one is coming for your Remington 870 Field Model that you use for hunting and skeet shooting, and you’re probably right. However, when New York passed its most recent Assault Weapon Ban, it may have actually banned the Remington 870 and countless other pump shotgun models. Because 12 Gauge “short” shells are commercially available, you can fit many more of these shells into an 870 shotgun than the AWB allows.

Certain USSS units are equipped with Knights Armament SR-16s. While not explicitly banned by name in any of the introduced Assault Weapons Bans – mostly due to the fact that Knights Armament produces relatively pricey guns – the SR-16  is a semi-automatic rifle that accepts a detachable magazine and has a (1) collapsable stock, (2) pistol grip, (3) threaded barrel, (4) flash suppressor, and arguably a (5) forward grip. That would make this rifle super illegal under the most recently introduced Assault Weapons Ban because of its number of “evil” features.

Designated the M110 in the Army, the Knights Armament SR-25 is essentially a 7.62 caliber semi-automatic rifle for designated marksmen. Certain USSS units use the SR-25 alongside designated bolt-action sniper rifles.

Unfortunately for us plebs, the SR-25 would also be banned under the Feinstein AWB, which Hillary Clinton supports. While not banned by name, the rifle – even in its most neutered form – fails the features test because it has a pistol grip.

That, plus it can shoot a big bullet a long distance, which everyone knows means it can take down a commercial airliner, or something…

So what did we learn?

The point is that every single day, Hillary Clinton relies on United States Secret Service Agents for protection. Every day, they show up to protect Hillary and company with semi-automatic pistols, submachine guns, and even sometimes with shotguns and rifles.

If Hillary Clinton is elected and is able to implement her anti-gun policies – reinstating the Assault Weapon Ban, banning so-called “armor piercing ammunition,” and reversing the Heller v District of Columbia Supreme Court decision – every single gun she relies on for protection would be banned or heavily, heavily regulated on the civilian market.

Let that sink in…